How to Find a Problem Worth Solving

Written by guest post by Noah Bragg, founder of Potion. on December 15, 2022

I like to think of an entrepreneur as someone who tries to solve a problem, rather than figure out how to avoid it. But how do entrepreneurs distinguish between problems that are a waste of time, and the ones worth pursuing?

My name is Noah, I’m the founder of Potion and I have worked through finding the right problem to chase many times. Potion is a website builder built on top of Notion. Potion allows you to create simple websites without having to know how to code. Users can use the tool that they already write in all the time, Notion. I’ve now built Potion to $5k+ MRR all on my own.

But figuring out that Potion was the product I should build wasn’t that simple. And it’s never simple to find the right problem as an entrepreneur.

The struggle of finding a problem worth solving

If you are like me, whenever you get a great idea, you hop on Google to see if someone else has already solved it. And more times than not, you’ll find there are many companies already working on it.

The variety of products and services accessible to consumers today, paired with ever-changing needs, has created an uber-competitive landscape for businesses. This forces businesses to continually develop new products and services, or improve existing ones. As a result, it may be hard to find a problem that is perfect for you to solve. Sometimes it’s fine to work on an idea that multiple companies are already working on. That may be the validation that proves there is demand. But you have to have the skills and abilities to differentiate and compete.

As a solo entrepreneur, I needed to find a problem that would allow me to serve customers well without competing with the tech giants of the world. And I didn’t want to raise a bunch of money. This put a lot of limitations on what I could do.

Searching for a problem

So, how does one find a problem worth solving? This is the question that I was really interested in when I was looking for a problem like Potion. And that is part of the problem - I think the answer will be different for everyone.

There are so many problems that I honestly don’t care about. They don’t have any meaning to me. And it’s hard to find ones that I actually do care about. Since I tend to be a laid-back guy, I rarely recognize or even notice many problems throughout my day!

Not only do you have to find a problem you care about, but it has to be an opportunity that could lead to a successful business. The Eisenhower Matrix is a good way to think about this. 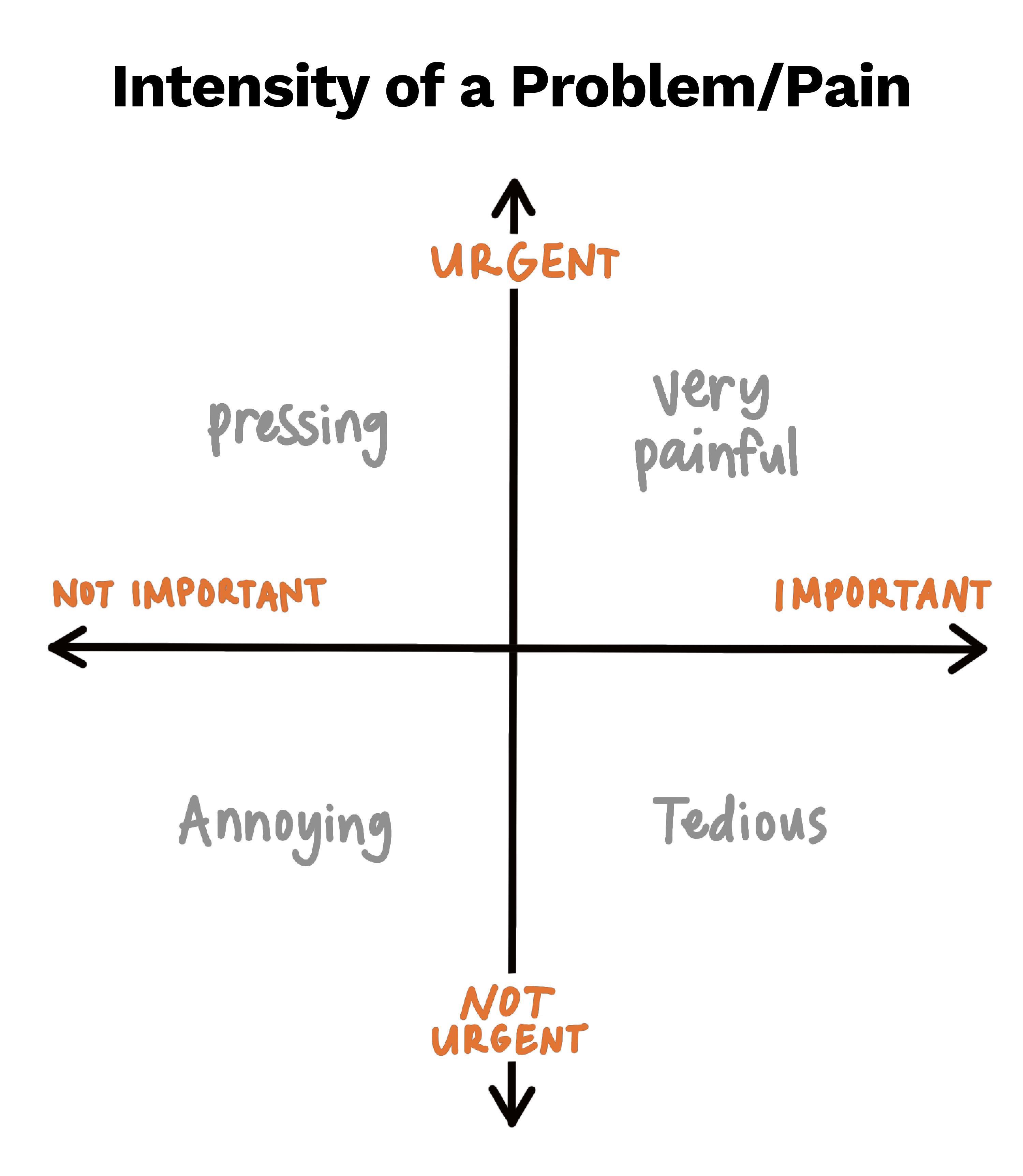 You primarily want to find a problem that is important as well as urgent (the top right quadrant of the table).

There are so many other filters that you have to look at a problem through as well. Courtland Allen compiled a great list that you can see in this Google Doc.

He lists many filters and questions to ask yourself, as a framework for evaluating the worth in the business problem you’re trying to solve.

For Potion, I decided that I wanted to build on top of a platform. I saw this as a benefit for me because then I would be competing in a smaller niche. And many times the platform company, Notion in my case, will work with products to help market them.

I saw many users on Twitter talking about Notion. They seemed to love the product. That was a signal to me that this could be a great community to build for. Maybe they would talk about my product too.

Finding a problem through progressive discovery

Maybe the best way of finding a problem doesn’t come from sitting around a table with your friends and writing ideas on a whiteboard.

1/ So much of building a product/company is about progressive discovery. You build something, you figure out something else, then you build that, and so on. But you only figure out what to build by taking the first step, which may not always be *exactly* in the right direction.

There is so much unknown around specific problems, hence why they’re a problem. There really isn’t a great way to learn about the unknowns other than just trying to solve them. Jump in and begin building something that might be the right solution. While you may not be right on the first try, hopefully you will gain critical feedback to point you in a better direction.

Building a new business is like a science experiment. See some real live data, make some assumptions about the problem, and then prove or disprove your assumptions by building a prototype.

This is what I did with Potion. I saw that there were hundreds of Notion users trying to add a custom domain to their public Notion pages using a really hacky code solution.

That showed there was some demand for this! But I wasn’t sure that people would actually be willing to pay for a website builder like this. From my research, I made the assumption that they would and started building the first version of Potion.

I talked to many users and got a lot of feedback along the way. Thankfully people really liked what I was building and things started to take off!

If you listen to feedback and keep learning along the way, you will eventually stumble upon something of great value! The success-defining characteristic is that you enjoy the process of finding problems and solving them. This will set you up to persist in the journey and find a viable product. You got this!